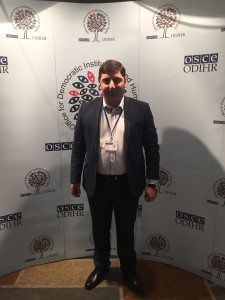 An implementing partner of the EaPMN in Armenia, Analytical Centre on Globalization and Regional Cooperation, represented by Armen Grigoryan, has been presented at the OSCE ODIHR Human Dimension Implementation Meeting in Warsaw, Poland. Mr Grigoryan made a statement regarding the situation of the national minorities in Armenia, and stressed the importance of the adoption of the anti-discrimination legislation in the country.

Minority civil society organizations (CSOs) in Armenia recommend the government and state authorities to decrease or simplify the procedures related to customs taxes, which limit their access to freely receive donated literature and textbooks in their native languages by the governments and institutions from their historic homelands.

A statement related to the situation of the national and ethnic minorities in Armenia has been made on 30th September, 2015 during the Working Session 14 dedicated to Tolerance and Non Discrimination.

This document is a European Parliament resolution of 10 March 2010 on the situation of civil society and national minorities in Belarus. END_OF_DOCUMENT_TOKEN_TO_BE_REPLACED

The first part of this paper looks at the issue of preserving those regional or minority languages that are in danger of falling into disuse. This applies also to three regional... END_OF_DOCUMENT_TOKEN_TO_BE_REPLACED