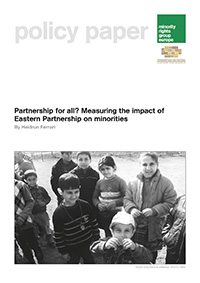 In relation to the policy paper, Minority Rights Group plans to publish an Advocacy Guide for Eastern Partnership minorities in early 2015.

The United States Department of State, Bureau of Democracy, Human Rights, and Labor annual report on freedom of religion in Armenia in 2014. The report summarize the situation as follows:... END_OF_DOCUMENT_TOKEN_TO_BE_REPLACED

The conference report contain all speakers speeches  to assess the status of the freedom of religion and belief in Georgia and Armenia. The publication document the discussion on the relationship... END_OF_DOCUMENT_TOKEN_TO_BE_REPLACED