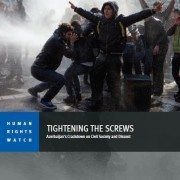 Azerbaijan’s record on freedom of expression, assembly, and association has been on a steady decline for some years, but it has seen a dramatic deterioration since mid-2012.  Since then the government has been engaged in a concerted effort to curtail opposition political activity, punish public allegations of corruption and other criticism of government practices, and […]

The conference report contain all speakers speeches  to assess the status of the freedom of religion and belief in Georgia and Armenia. The publication document the discussion on the relationship... END_OF_DOCUMENT_TOKEN_TO_BE_REPLACED