A new documentary with network partners was released in the beginning of 2021. The project is based on the stories of four Roma women fighting for their equality. These women live in Ukrainian cities and regularly face discrimination based on ethnicity and gender in their lives. This is a vicious circle from which it is difficult to get out. Especially for Roma women, who are not only under the yoke of the external environment, but also of cultural and gender stereotypes within the ethnic group itself.

All of them swim against the tide, openly oppose discrimination – they receive education, actively socialize, work, engaged in social projects, defend their rights. Not willing to wait for external help from the state, or changes in social stereotypes, they begin to change themselves. They seek equal treatment and serve as an example for other Roma women, while maintaining the beauty of the Roma culture. 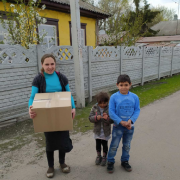 This paper analyses the constitutional rights by the constitutional courts of Central and Eastern Europe (CEE), in particular, the equality and anti-discrimination clauses. The CEE is a wide and untidy mosaic of... END_OF_DOCUMENT_TOKEN_TO_BE_REPLACED